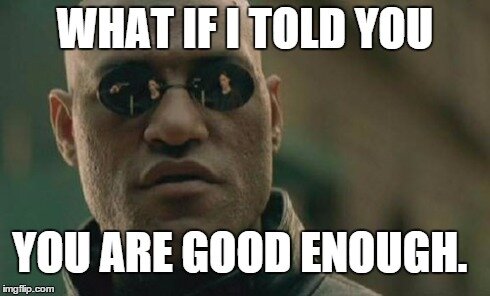 I am not good enough – a common excuse for inaction, isn’t it? It doesn’t matter what area of life we’re talking about. This excuse is universal.

It may take different shapes like “I’m not ready” or “I am not prepared”, but it’s still the same.

Consider the following example: if you record your voice, and then listen to the record, you will probably get a feeling that the recorded voice is similar to you, but not exactly the same, which you’re used to hear in your mind and interpret as your real outside voice other people hear. Right?

The same applies to the excuse “I am not good enough”. The truth of this belief can be called into question.

You can go further and find evidence everywhere, which proves that the statement You are not good enough is wrong. Look around and you will see lots of examples that your estimations about reality are not correct.

Many people do what you think you are not good enough to do. For example, many people successfully run their businesses without having any education. Shy guys date girls without reading a book on seduction. Average people with average jobs have friends. When they meet they discuss their average lives and problems, nothing extraordinary.

You may say: “Yes, they have it all. But I don’t, because I’m not good enough.” OK, how have you concluded that you are not good enough? Did you conduct a study recently?

The truth is that this belief was formed long time ago, when you were a child. It had stuck in your mind and heart, so now you continue using this outdated belief. But every belief is revised from time to time. For example, people used to believe that the sun rotates around the earth, and gods live on Olympus. But some research and facts analysis proved the opposite.

If you assume that you are not good enough, you’re building a transaction: I’m not OK – they are OK. It’s a losing approach.

The winning approach is to build a I’m OK – They’re OK transaction with the outside world.

How do you do it?

Give yourself a permission to be good enough on your inner scale. Lower your bar mentally. Nobody forces you to keep it so high. Other people’s scales are their problem. There’s no any Unified Scale of Goodenoughness (recommended by the Universal Committee of Goodenoughness). It’s just you who decides if you’re above or under the bar (and if it exists).

In fact, you do not need it at all. What’s the point to rely on it if it is completely subjective? There’s no sense to have such a scale. It’s like using a broken compass. Throw it away and create another one, which will guide you the way you want to go.